In the summer of 2005, a group of Ghanaian college students at the University of Ghana hosted an event to provide achievement awards to exemplary teachers and pupils from the public schools in their hometown. The schools in Yonso (a town of about 5,000 people) faced major problems — a lack of educational resources, a shortage of teachers, a lack of basic facilities, and many other obstacles. So, the college students created their own organization dedicated to supporting local education. They called themselves the Yonso Students’ Union, and their goal was to help other children achieve what they themselves had achieved — admittance into college. Led by a psychology major named Kwabena Danso, they raised funds to accomplish their goals completely independent of foreign donors or NGOs.

That same summer, a University of Vermont senior named Nick Caccavo was preparing for a semester of study at the University of Ghana. Upon arriving in Ghana that August, he saw firsthand the fact that millions of Ghanaians have no access to basic health care, liveable housing, or adequate nutrition. However, like many of his fellow American students traveling abroad in Africa, he felt overwhelmed and unsure how to make a difference in the addressing the poverty of his host country. 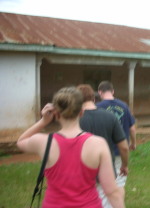 Danso met Nick and a group of other American students shortly after they arrived at the University. Recognizing that the Yonso Students’ Union could benefit enormously from networking with international students, Danso invited several Americans (including Nick) to travel across Ghana to visit Yonso. The efforts of the Yonso Students’ Union were apparent in the small town, most visibly in the new school library that had been built largely due to active fundraising by the organization. But as Danso pointed out, the library contained only a few shelves of books. To the Americans who had been searching for an answer to the question of “what can we do to help?”, the empty library seemed like an invitation to get involved. To Danso, and to the schools of Yonso, the involvement of the Americans opened up a world of possibilities.

For the remainder of their semester in Ghana, the American students worked with Danso and the Yonso Students’ Union to make plans. Together, they filmed an amateur documentary about Yonso and the struggle for education in rural Ghana. They brainstormed ideas about how the resources available in the US could best be used to help Yonso. By 2006, the American students were back home — but for Nick, the work was just beginning. 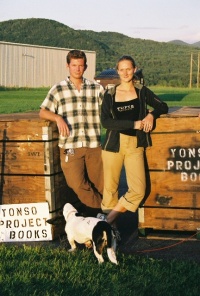 Nick and Sonja before the book shipment

Nick spent his last semester at the University of Vermont organizing a drive to collect schoolbooks to stock the library he’d seen in Yonso. He rallied help from his family and friends to ultimately send more than ten thousand pounds of books across the Atlantic. By the time the books had been collected, packaged, and shipped — paid for with funds raised by Nick and his friend Sonja Good Stefani — the book drive had begun to resemble a coherent organization. Nick, Sonja, and several other friends decided to form a board, and the Yonso Project was born as an incorporated nonprofit in 2006.

Since 2006, the Yonso Project has grown steadily both in the US and in Ghana. We have members and regular donors in communities, colleges, and high schools across the US, many of whom have now been supporting the Yonso Project for years. In Ghana, our programs have met with such high demand that we operate in four communities with a permanent office in the community of Apaah. We have provided educational assistance to hundreds of students and to several local schools, and our microlending program has provided over $40,000 in loan capital to struggling families. But as the Yonso Project has grown and its mission has evolved, we have remained an organization that is administered by individual volunteers and funded primarily by individual donors. Nine years later, Danso, Nick, Sonja, and others are still working together to make the YP a success.